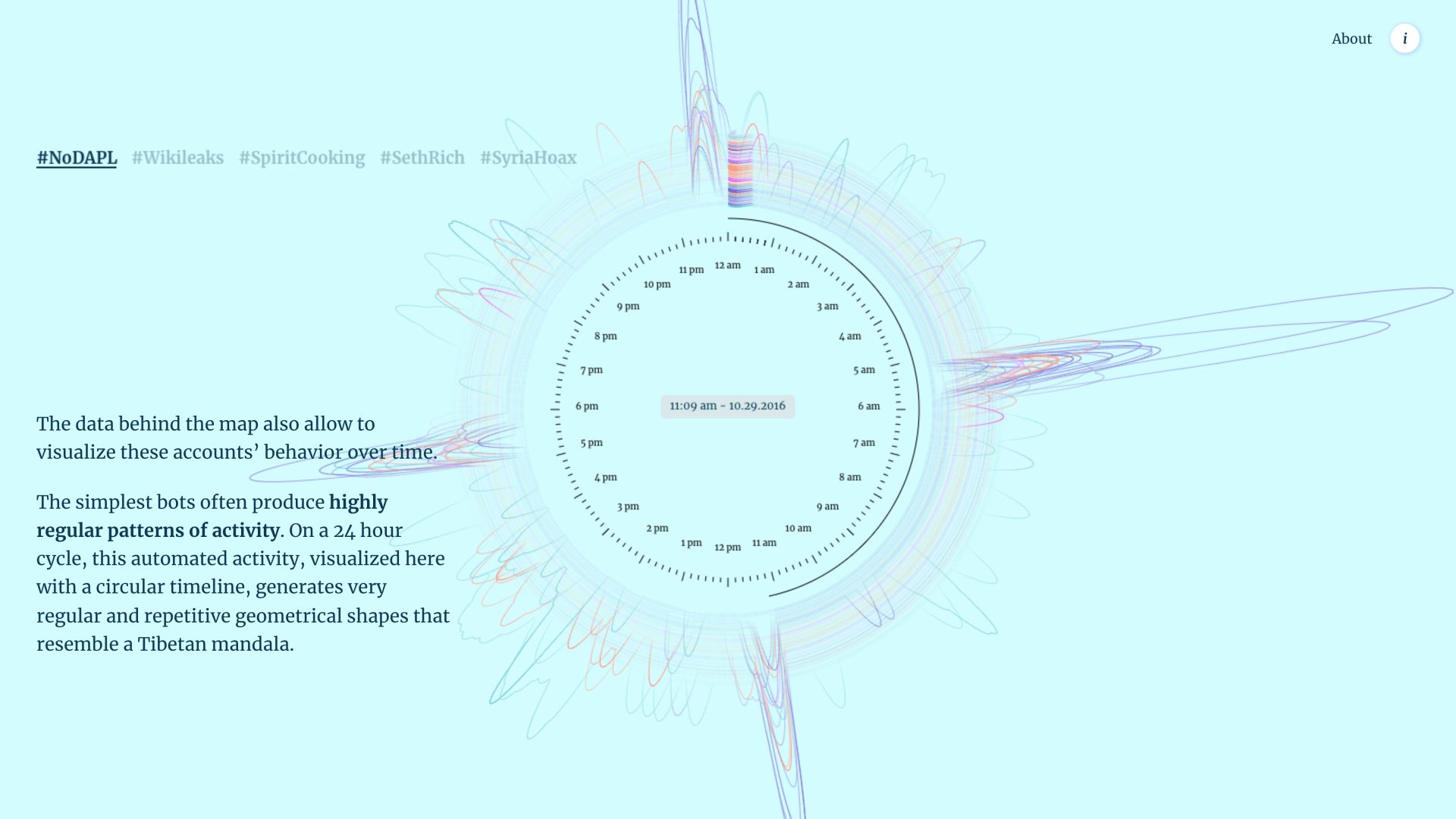 Who’s behind the spread of “Fake News?” On the eve of the 2018 U.S. midterm election, the non-profit research group Knight Foundation analyzed Twitter data to investigate how disinformation spread during the 2016 presidential race. Their study found sobering statistics, and with social media continuing to grow in influence and specious activity showing no signs of slowing, Knight Foundation’s findings were urgent. They hired Accurat to help bring them to life.

Transform a 60+ page research report into an engaging digital narrative.

An interactive work of data journalism that that relays urgent facts and messaging with dynamic visuals.

Knight Foundation’s study (conducted with the network analysis firm, Graphika) uncovered an army of hired–hands and bots responsible for the widespread propagation of false reports. The report linked 6.6 million tweets to disreputable sources in the month before the 2016 election, and an additional 4 million after, in a single month of 2017. Knight Foundation needed a way to summarize their lengthy research report in a way that would engage the general public. We were contacted to help create a digital experience that would cut through the noise with powerful visuals.

Our designers and developers worked in close collaboration with Knight Foundation to adapt research into a user–friendly “scrollytelling” experience. To do this, we pared the report down to its most salient features and essential components. We shaped these elements into an educational narrative with explanatory text and visuals that gradually increase in complexity. To place the report's discoveries in context, we summoned familiar iconography. The responsive microsite brings Knight Foundation’s report to life with visuals that called to mind birds in flight: a nod to the social media platform.

With the partnership, Knight Foundation aimed to broaden the reach of the report to include every eligible voter. To ensure accessibility, we built versions optimized for both mobile and desktop. The entire endeavor was completed in just three months.

Focusing on the 24-hour-period before the election, we portrayed individual accounts as birds and their activity as flight paths. Tweets constitute a deviation in course, and are represented as “spikes” in an otherwise straight line. Comparing similar accounts, one can discern nearly identical flight paths that resemble flocks: an apt representation of accounts chirping in unison.

To show the correlation among different interest groups -- Trump supporters, hard-edge conservatives, white nationalist groups -- we color-coded accounts. We then simplified the 44 hues that colored accounts with a blended image showing how disparate interests joined together to form a solid and formidable front.

A second phase of the interactive experience shows the same user accounts’ activity over time, focusing on five busy days for relevant hashtags -- e.g. #Wikileaks and #SethRich. Orienting the same flight path methodology around a 24-hour-clock graphic, one can discern a clear difference in human versus bogus activity. Outsized spikes appear unnatural both because of their size and the regularity of their occurrence. While regular users tend to tweet sporadically during the day, bots and hired agents tweet at regular intervals, and oftentimes at odd hours of the night. We emphasized this detail with a gradient that darkened as nighttime hours ticked by.

In adapting a lengthy, non-profit research report to a user-friendly, device-agnostic digital experience, we helped further Knight Foundation’s mission of advancing journalism and preserving the integrity of communications in the 21st century. The report and Accurat’s take on it earned organic media, with coverage in Politico, NPR, and Adweek, among other outlets. 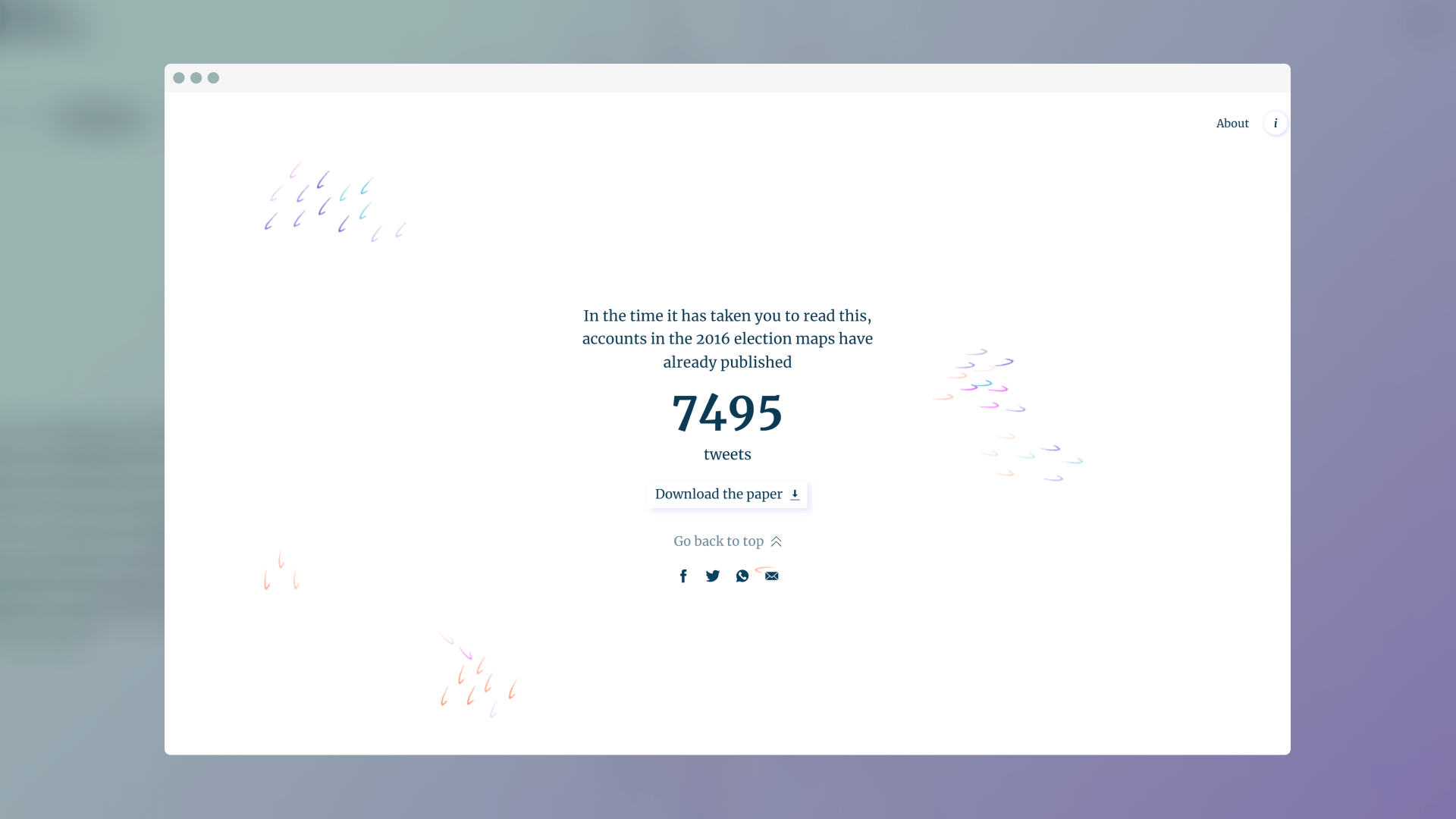 EXPLORE the live interactive on Knightfoundation.org